Aaron Amic, a former U.S. Navy submarine rider who has served as a sonar officer for

Los Angeles-class and Ohio-class submarines and spans the Atlantic and Pacific Oceans, provides an easy-to-understand explanation of modern torpedoes.

Modern Submarine Torpedo Attacks Are Nothing Like What You See In The Movies --The Drive
https://www.thedrive.com/the-war-zone/33018/modern-submarine-torpedo-attacks-are-nothing-like-what-you-see-in-the-movies

According to Mr. Amic, modern torpedoes can be roughly divided into 'thermal type' and 'electric type' depending on the drive system.

First, Otto Fuel II, which does not require the supply of oxygen from the outside, is used so that thermal torpedoes can burn even in water, and gas turbine engines and swash plate engines are used for the engine section.

A major feature of thermal torpedoes is that they are faster and have a longer range than electric torpedoes. Liquid fuel has a high energy density, and the latest gas turbine engines are also excellent in sound deadening, so thermal torpedoes can rush underwater without being distracted by the opponent until just before the hit.

On the other hand, electric torpedoes are more popular than thermal torpedoes because they are easy to manufacture and maintain and are less dangerous to handle. A high-torque electric motor with a built-in permanent magnet starts accelerating in less than a second when fired, instantly accelerating to 50 knots (about 92 km / h) and adjusting speed without mechanical delay. I will. Another advantage of electric torpedoes is that they can be modularized and operated flexibly.

For example, a German-made DM2A4 Sea Hake Mod 4 torpedo can be equipped with up to 2-4 batteries. You can reduce the weight by reducing the battery, and extend the range by increasing the battery. In addition, the speed of 50 knots is not affected by the number of batteries, and it is also excellent in quietness.

What both types of torpedoes have in common is that they are very quiet. That's why Amic said, 'In the movies

Crimson Tide and Hunter Killer Dive , pilots desperately try to avoid torpedoes to liven up the scene, but that's unlikely to happen on modern submarines. In the case of a torpedo attack in the 21st century, the target is likely to go unnoticed until it is destroyed. '

Therefore, in the exercises that are conscious of actual battles, it is important to decide which of the two submarines will find the opponent earlier and make the first strike. Regarding the battle between modern submarines, Mr. Amic said, 'The long dogfight, which is a popular scene in submarine movies, does not happen in reality. In the actual underwater battle, the attacked side has almost no time to react. Will be killed. '

In addition, the torpedo launched from the submarine has a wire attached as shown in the image below, and is connected to the submarine's fire control system with a data link. 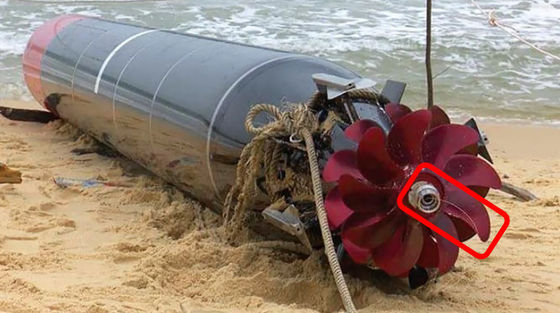 Control through this wire allows the torpedo to rescale, retarget, and even stop immediately at any time at the direction of the fire control officer. Also, if the connection is lost for any reason, the torpedo will follow the last given instruction or execute the pre-programmed instruction accordingly.

Some of the orders given to torpedoes by submarines include the setting of a ' kill box ', which is the range of destructive effects caused by detonation. This killbox can be resized at any time to avoid damaging the wrong target or your ship. Also, if the torpedo does not reach the killbox properly, it will be inactivated so that the warhead will not detonate, the engine will stop and it will sink into the sea. Therefore, unlike the scene in the movie ' Chase the Red October! ', The situation of 'self-destructing by command input' does not occur.

Based on these examples, Amic said, 'Modern submarine torpedoes are extremely powerful and surprisingly deadly machines. They are powerful in terms of' high speed, '' lethal, '' long range, 'and' low detection. ' The combination gives the torpedo a huge advantage over other weapons operated by the Navy. '